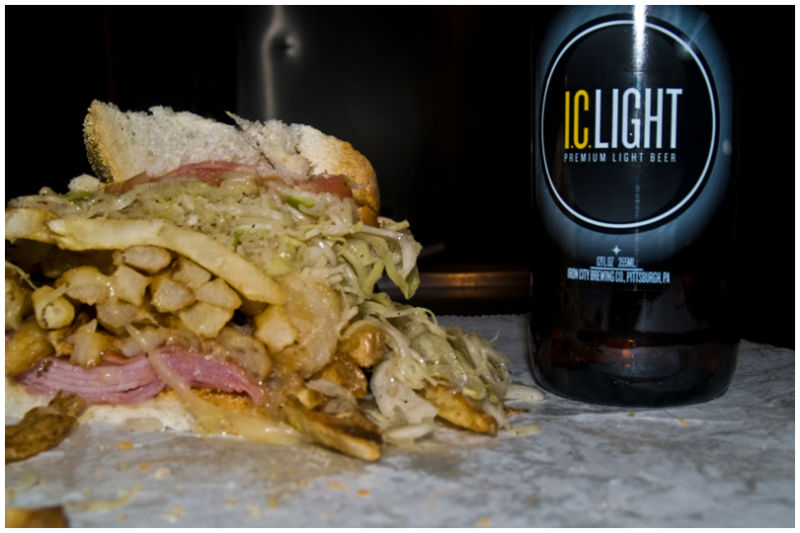 A world famous Primanti Brothers sandwich - capicolla and cheese - and an ice cold IC Light. Doesn't get much better!

The sandwich is said to have its origins in the city's steel days when blue collar workers needed a hot meal mid-shift that would keep them full all day long. However, the workers had neither the time nor the utensils for such a meal. By combining the sides with the sandwich, a Pittsburgh staple was born. Of course, the restaurant offers a slightly humorous take on it, offering the explanation that the Primanti brothers simply forgot the plates and forks one day. According to the restaurant, Joe Primanti, born in Cleveland, invented the sandwich during the Great Depression. His brothers, Dick and Stanley, later joined him along with John DePriter who was the cook and self-promoter. The Primantis opened their hole-in-the-wall restaurant at Smallman Street and 18th street in the Strip District of Pittsburgh and served the late-night and early-morning workers who were unloading fish, fruits and vegetables.

It has also been a tradition for the late night crowd to go to Primanti's in the strip district after the bars have closed, due to their hours of operation (at one time they were one of the few establishments open after 2 a.m.). Crowds line up with standing room only, however the cooks prepare the sandwiches at a very fast pace and keep the crowd moving.

AHHHH I would kill for one of those right now!!!

what a coincidence...the primanti's that you mention on Smallman is 3 minutes from my house! the great thing about primanti's is that if you have a craving at 3 in the morning, you can totally go get a sammich!

@scott young: I don't know if you saw yesterday's picture-taken one block up on Penn Avenue and I have a couple more coming tomorrow. Thanks for visiting.

Hey Mr. Dog, this looks really good, next time you visit home, bring one back for us! I enjoy reading your bits of history this week.

Looks kind of like what my son described from the "Grease Trucks" that park on his college campus. He said they are really tasty but you cannot eat another thing all day and into the next!