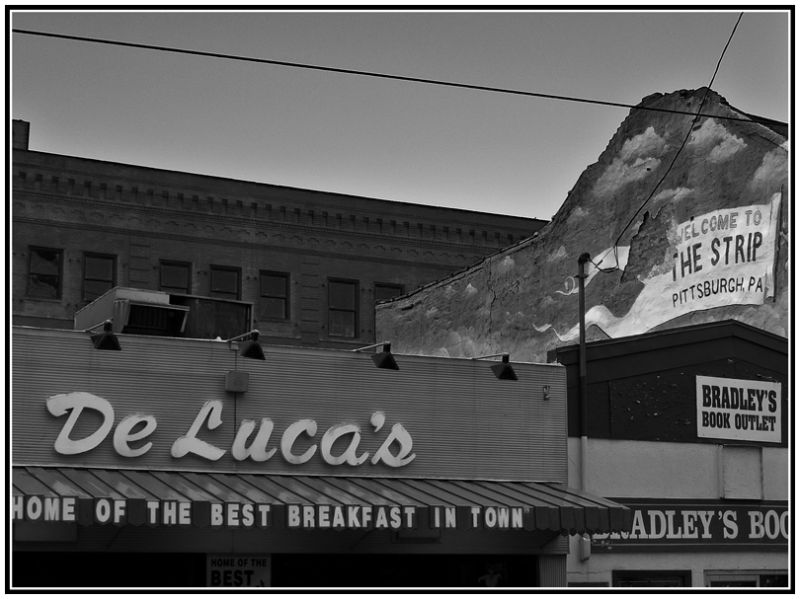 The Strip District is a neighborhood in Pittsburgh, Pennsylvania in the United States. It is a one-half square mile area of land northeast of the central business district bordered to the north by the Allegheny River and to the south by portions of the Hill District.

The area has developed into a historic market district with many ethnic food purveyers, some art studios, antique dealers, unique boutiques and other such businesses setting up shop where trains once delivered produce by the ton. The Strip District comes alive primarily on weekends during the summer months when street vendors are selling their wares, the open-air farmer's markets are in full swing, and party-goers sit outside and enjoy a drink. The Open Stage Theater located in the Strip, occupies a former liquor distributor's warehouse. It features comtemporary American drama and also hosts the Pittsburgh New Works Festival.

It sounds like a great place. The restaurant sounds like my kind of place. I am big on going out to breakfast...Mmmm! Very nicely done in black and white.

A very interesting image here... the B&W makes it, no doubt.

Personally , I'd rather go to Bradleys and get lost for an afternoon of reading.... Nice shot.

Interesting pictures and information. Thanks for the welcome and I'm looking forward to more glimpses.

@Angela: Do you know who's blog your looking at?

Good composition in including both DeLuca's and the Strip sign... Nice work! I love DeLuca's. :-)

I'm pretty sure I see you on a daily basis (at least the weekdays!).