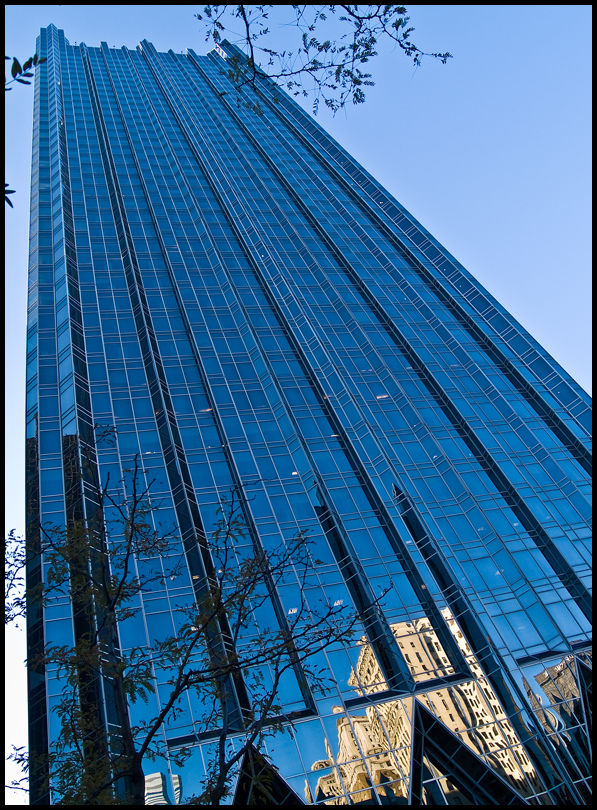 Posted by jeff (aka dogilicious) (Millerstown, PA, United States) on 28 October 2008 in Architecture and Portfolio.

PPG Place is one of the major distinctive and recognizable features of downtown Pittsburgh. Although it is most well known for its tower, One PPG Place, it is actually a complex of six buildings, all of matching glass design. The complex is named for its main tenant, PPG Industries, one of the world's largest glass manufacturers, which initiated the project in 1979 as its world headquarters.

The building features prominently in the 1999 film Inspector Gadget.

wow! This is a great shot, reflections really add nicely to the photo.

Fantastic shot. Love the angle and the reflection. The tree anchors it quite nicely.

I really like the angle of this one... Seems a touch too blue though that may just be the effect of the reflection of the sky.

Did anyone give you trouble for shooting the building? PPG Place has been notorious for bullying photographers.

Excellent! Love the reflection at the bottom too!

This is great! I love the gradation of the sky top to bottom against the glass of the skyscraper. Excellent

I really like the angle of the shot.
I would possibly find a way to incorporate more of the bottom reflection into the photograph.
Happy shooting.

@TravBoy: Thanks, I tried but I was right up against another building. I didn't have a short enough lens.