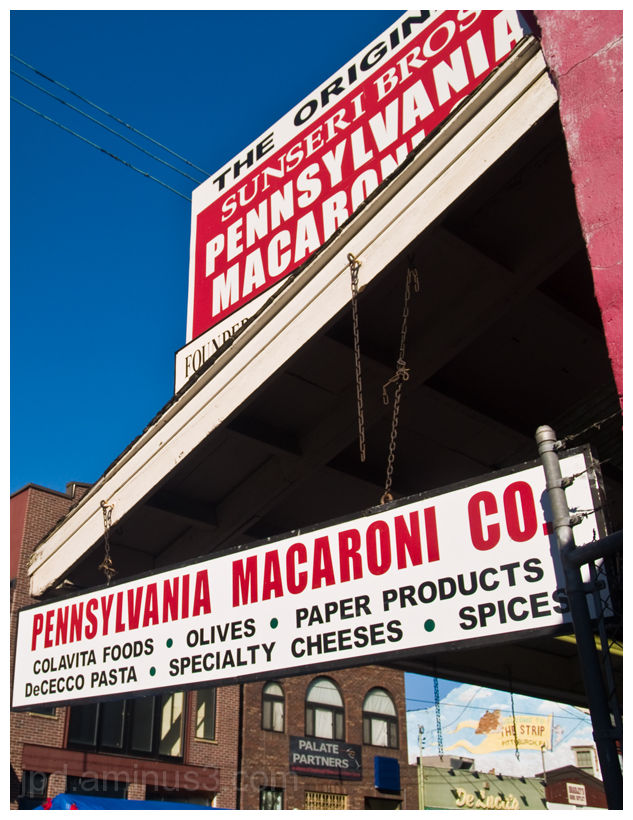 Posted by jeff (aka dogilicious) (Millerstown, PA, United States) on 4 January 2009 in Cityscape & Urban and Portfolio.

In the very rich tradition village of Trabia, Sicily, there were 3 brothers
of the proud, hard working Sunseri family that envisioned the dream of bringing their goals and admirable work ethic to America.
In 1902, Augustino, Salvatore and Michael Sunseri formed the company that is now known as the Pennsylvania Macaroni Company.
They started out by manufacturing pasta. After going through the normal growing pains of starting
out, things started looking up. Then, a devastating fire that would have knocked the life and determination out of many did not stop the Sunseri's.

With incredible guts and will, they rebuilt and soon the pasta manufacturing blossomed into olive oil and spice retailing along with offering specialty food
products and cheeses. The nucleus was formed and in the late 1940's, Augustino's sons, Robert (Uncle Bob) and Salvatore took the reins and it was at this point
that phenomenal success could be seen developing.

The third generation of Sunseri's is now at the wheel and when you visit the legendary location in the "Strip District" in Pittsburgh, Pennsylvania, you will find them easily accessible and bending over backwards to show you how important your business is to them.

EYES WIDE SHUT from The library of my soul, United Kingdom

A fascinating potted history which inspires with it's passion and against the odds nature. Love the shot.

There is something about the image which oozes pride. Whenever I visit Canada and USA I am always struck by the speciality businesses, the family owned enterprises, something that has seemingly died a death in the UK, as foreign investors strangle everything which once was thriving and personal.

I love the sign in combination with the background story, but I'm a bit confused by the paper products?! ;)

a sharp image, a tale with some life deductions there.

The history supporting this image is very interesting, the shot itself is also very good, it has impact.

Interesting shot, like the angle and how the signs contrast with the blue sky.

Nice shot and I love the story.

I love that after you're finished with the Sunseri Brothers - you can waddle across the street for a little Pilates workout - it looks like we'll need it! Thanks for the narrative.

Cheerful and bright. I have a hard time not spending my bits of excess time at Enrico's Biscotti. best...jerry

@ordinaryimages: Are you from the 'burgh?

Thanks for the wonderful photograph and the history! Great Work!!

i like these zig-zagging lines and the riot of words on the various signs.