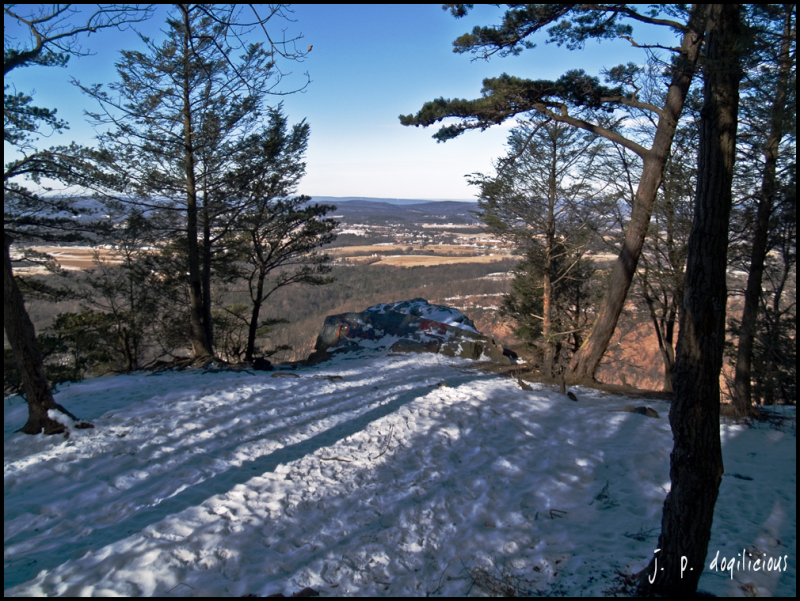 I spent part of a very cold Sunday hiking to one of my favorite spots along the AT-Hawk Rock. A normally short hike - about 1 mile - was fairly treacherous in spots.

I passed two gentlemen coming down the mountain who reported that they spent the night at the top. The weather in Central PA was in the single digits overnight and the windchills were below zero. Not sure if this was an act of bravado or insanity but probably somewhere in between. They also reported that in places they had to slide down on there rear ends. I cursed them later on as I also had to slide where they had wiped out the snow covering down to bare ice.

On my way down I happened upon a couple heading to the top. I reported the conditions to them and they cautiously returned to their car. So, I guess my standing on the scale between bravado and insanity was greater than theirs and less than the earlier gentlemen.

I'm guessing your balance is very sane under the circumstances!!! Thank you for going to so much trouble to bring us this most wonderful image!!!

CAn't believe you did that, you are lucky LifeLion didn;t have to fly you out... Great shot though and surely one to prove insanity!

Well all I can say is it was worth the climb!

Bravado aside, this is a lovely shot.

A well framed shot, worth freezing your butt end for :-)

Isn't weird how you'll do anything for a shot...but well worth it Jeff! This is a keeper! Love it! Cool story ;)